Knicks vs Celtics Playoffs Round 1 Preview 2013

Posts : 945
Reputation : 432
Join date : 2012-12-22
Age : 34
Carmelo Anthony has the scoring title, the division crown and the MVP recognition. Now all he has to do is beat the Celtics. No player has more on the line than Anthony when the Knicks begin their first round playoff series with Boston on Saturday at Madison Square Garden.

We don't tend to think of Melo as old, but he's 28 and playing the best basketball of his career on arguably his finest team. He's rarely had a chance like this to make a deep, meaningful postseason run. The 2008-09 Nuggets were also really good and Melo led them to the conference finals, averaging more than 27 points per game. That's the kind of performance he needs to have this year.

Without Amar'e Stoudemire in the lineup, Carmelo has become the Knicks unquestioned No. 1 option, using over 35 percent of the team's possessions when he's on the court. Normally a spike in possessions used would equate with a drop in efficiency, but in Melo's case he's been even better.

The next generation GM


How the Celtics are ushering in a new age of player evaluation.
He posted the second-highest True Shooting Percentage of his career and even cut down on his turnovers, which weren't that high to begin with, but it's still an accomplishment. That's huge for the Knicks because their lack of turnovers are as much a reason for their overall offensive improvement as all those 3's they launch.

Mike Woodson will have interesting matchup opportunities for Melo, and how he chooses to use him will be one of the main subplots of the series. The Celtics have been experimenting with a "big" lineup featuring Paul Pierce and Jeff Green on the wing with Brandon Bass and Kevin Garnett up front and Avery Bradley as the guard. That leaves an interesting question for Woodson to answer.

Melo has more or less been the four, which would have him opposite Bass on defense. (The Celtics don't mind this matchup.) But someone will have to guard Pierce and Green on the perimeter and Iman Shumpert is only one man. On offense, Anthony can expect to see everyone from Bass to Green and Pierce and heavy double teams behind them. How he responds will define the whole series.

This is the superstar burden that Melo carries. He earned that designation with his play this year and now he has to finish the job. 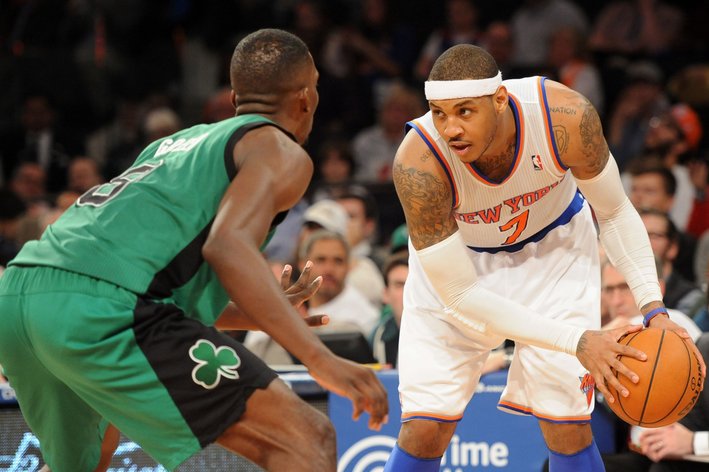